“We have tested most systems on the market, but nothing has been as user-friendly and flexible as Substly”

Stendahls is one of Sweden's largest and most reputable advertising agencies. After several years searching for a solution to manage their subscription-based services and licenses, they finally chose Substly.

“While other companies in the same field as Substly try to extract all possible kinds of data, Substly focuses on giving a clear picture of the recurring costs and lets the statistics speak for themselves.”
Krister Laag

Before contacting Substly, they had tested most of the available solutions on the market and even started building their own solution. They wanted better control and to save money.

Stendahls was excited about the potential of Substly as its subscription management platform allows businesses to easily manage their subscriptions, track usage, and optimise their spending. With Substly, businesses such as Stendahls can save time and money and ensure they only pay for needed services.

Stendahls save considerable sums of money with the help of Substly

With Substly, Stendahls found what they had been seeking for a long time. IT employee Henrik Wannheden and CIO Krister Laag think Substly's tool is easy and satisfying. – “We especially value the flexibility to specify what costs we want, whether a newspaper subscription, rent or any other digital subscription service,” says Krister.

“Today’s complicated pricing models make it harder than ever to see how much a single service, in fact, costs. Substly clearly shows how much it costs per month and year, which makes it easier to decide whether a service is worth keeping.”
Krister Laag

“Last winter, we discovered that we had purchased the same cloud service 11 times in different departments within the company. With Substly that would’ve never happened, and we could have saved a couple of ten thousand euros on a single service.”
Henrik Wannheden

Stendahls is looking for synergy effects within their corporate group

Krister aims to implement Substly across the entire corporate group, which comprises 1,500 employees in 20 companies. With the help of Substly, he sees potential for finding synergies and creating a clearer picture of which services the employees use within the corporate group. This would put Stendahls in a better negotiating position with vendors and make it easier to share licenses between the companies, thus saving considerable sums of money.

With Substly, Stendahls now have a complete overview of all their digital services, users, and recurring costs. And best of all, they no longer have to put all the responsibility on one person. They can now invite colleagues and department heads to review, add or remove subscriptions. 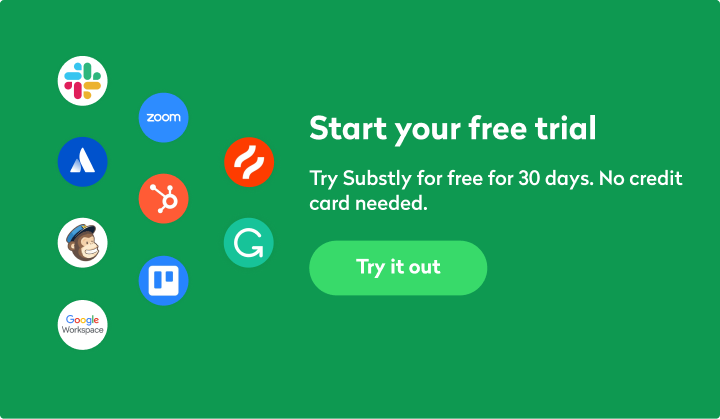 "We were shocked at how much we spent on SaaS."

Dirsys integrated its accounting software and cut subscription costs by 20%

"Other systems tend to be complex, but the user interface in Substly is easy to use, which is so lovely!"